Tuesday night, I spoke at the St. Louis Alteryx User Group about a learning program that I etablished within my team. The program culminated around challenging each team member to earn their Alteryx Designer Core Certification. Here's the presentation in a nutshell...

The Socratic Paradox is based on the (rough) translation of Plato's Socrates, "I only know that I know nothing." This is something that I really take to heart - I am constantly looking to learn, realizing that I am only as good as the last thing I learned. Being at the top of my game means that I need to stay sharp in my skills and take steps to make sure that I'm continually learning.

This philosphy is what has guided me through most of my career. Too often there is a trap where people that are viewed as 'experts' slow or even stop learning. This is a sure fire way to lose that expert status - especially as quickly as things change today.

Last February, I started a new position as Manager of Analytics at Mastercard. I lead a team focused on visual analytics, data preparation, data automation and much more. The primary tools we use are Alteryx and Tableau. Walking into that situation, there were a lot of potential hurdles to my success. I quickly realized that devising a strategy to tackle these hurdles would be the best way to make my mark on my new team and drive them (and myself) forward. Here's a rundown of the situation when I took the position:

So, faced with this, there were two very similar paths that we could take - utilize online training for Alteryx, or get certifed. I started with online training, and because I've always learned best by doing, I started completing in the weekly challenges. The problem here (for me) was that the only person holding me accountable for completing the challenges was myself. Pursuing the certification (and telling people that I was going for it), would put the pressure on me to accomplish the cert.

The Conundrum & The Trap

Deciding the pursue the certification was the first step in building a learning program for my team. Deciding to do this brought to mind a cartoon that I've seen multiple versions of. The basic idea is:

Knowing how the corporate world works and that people tend not to stay in their jobs near as long as they used to, the first point is really kind of moot. I'm more worried about the second scenario. Also, I've always thought about talent from the perspective that the one of the most important part of a person's skill set is their ability & wiliingness to learn (pairde with their propensity to be on time, but that's another topic). I'm convinced that with the willingness and apititude to learn, I can teach you almost anything

I'm a big fan of being able to trial things. This is no different. I created a rough plan and decided to do a brief trial. This consisted ot:

With the trial pieces done - deliverables here were the first certification on my team as well as completing it myself - the next step was formalizing the plan and challenging my team:

We experienced some quick success! That made it possible to extend the reach of this learning program:

As I mentioned above, I kept a close eye on the progress we made across the team and played the role of cheerleader - both to congratulate those who passed as well as encourage those who needed another try at the exam. Honestly, I didn't actually visualize the results until I was preparing for the St. Louis Alteryx User Group Meeting this week. However, here are the results across time. The stream graph below starts back in February 2019, with key points called out on the viz (see the bar chart below for the color key): 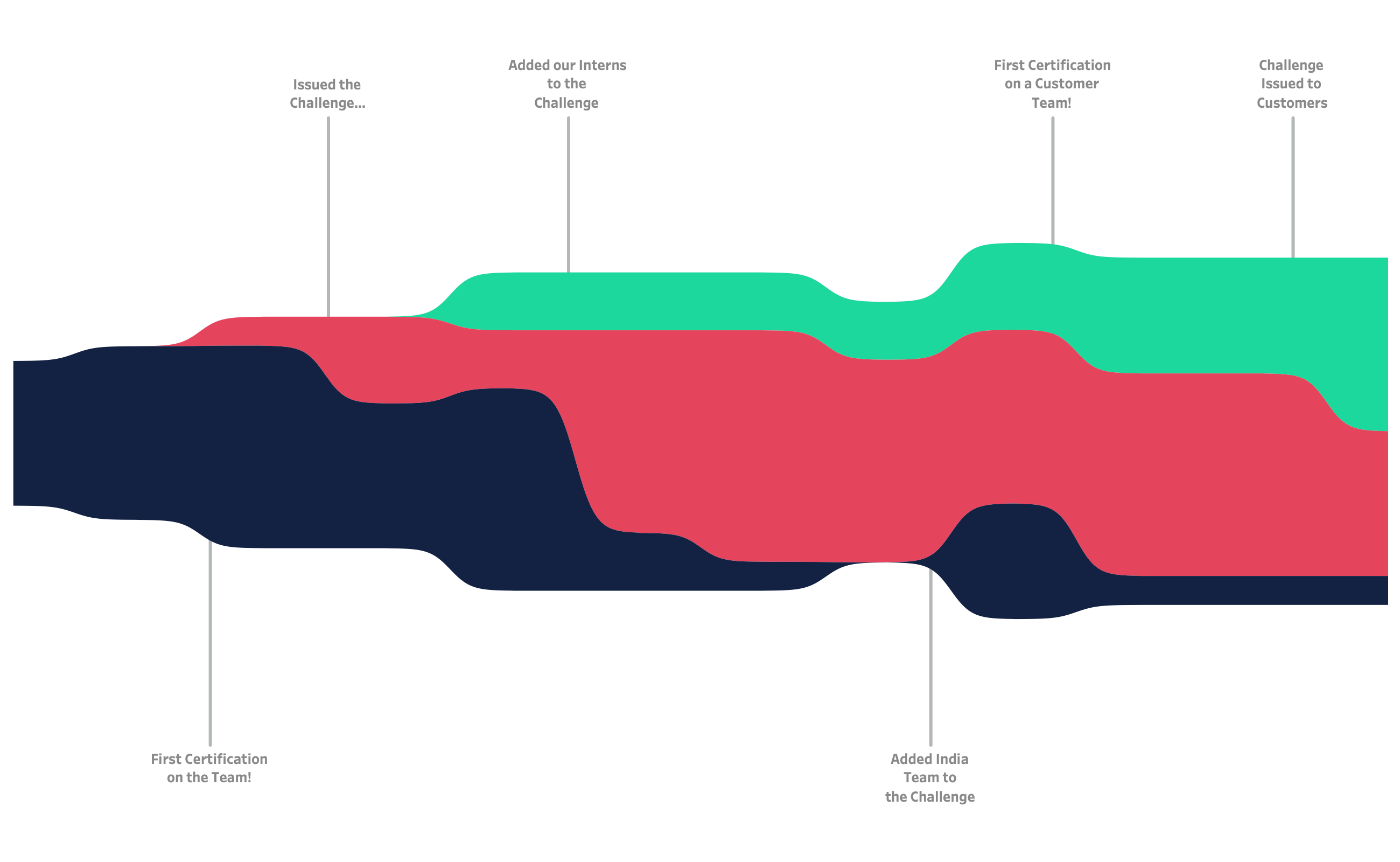 There were some changes to the structure of the team (i.e. interns leaving, job changes, etc.), as well as the addition of the offshore team (didn't include the super user in the viz though) accounting for some of the waviness of the overall stream graph. So to summarize - here's the current situation as of February 1, 2020:

Under a year in and we're sitting at 91.7% of the current team certified - with half of the team holding their Advanced Certification! Now, that's success!

We're sitting at just under 9 months since I issued the challenge - let's look at the original situation I outlined above and see where we fall today...

I learned a LOT through out this process - about Alteryx, management and personal development. Some of the key takeaways here:

Obviously, this is only my story, and I'm sure there are other approaches out there. I’d love to know what you think or what has worked for you! I'm a huge advocate for continued learning, so always open to hearing about alternate approaches! Feel free to reach out on Twitter or LinkedIn.